RYE, N.Y.–(BUSINESS WIRE)–Acadia Realty Trust (NYSE: AKR) (“Acadia” or the “Company”) today reported operating results for the quarter and year-to-date period ended June 30, 2022. For the quarter ended June 30, 2022, net loss per share was $0.00 and for the six months ended June 30, 2022, net earnings per share was $0.17. All per share amounts are on a fully-diluted basis, where applicable. Acadia operates dual platforms, comprised of a high-quality core real estate portfolio (“Core Portfolio”), through which the Company owns and operates retail assets in the nation’s most dynamic corridors, and a series of discretionary, institutional funds (“Funds”) that target opportunistic and value-add investments. 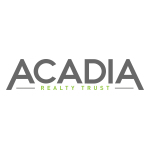 Please refer to the tables and notes accompanying this press release for further details on operating results and additional disclosures related to net income (loss), funds from operations (“FFO”) as per NAREIT and Before Special Items, and net property operating income (“NOI”).

“We finished another robust quarter evidenced by our operating results exceeding expectations. With the continuing momentum in Street retail, our fundamentals remain strong, and we expect this strength to continue to play out over the next several years,” stated Kenneth F. Bernstein, President and CEO of Acadia Realty Trust. “Notwithstanding the significant volatility in the capital markets, we continue to find ways to create meaningful shareholder value within our Core Portfolio and Fund Platform, including the strategic recapitalization of City Point.”

For the quarter ended June 30, 2022, the Company’s pro-rata share of credit losses and reserves is as follows (dollars in millions):

Henderson Avenue Portfolio, Dallas, Texas. As previously announced, in April 2022, the Company completed its first acquisition in the Knox-Henderson corridor of Dallas, Texas with its purchase of the Henderson Avenue Portfolio (“Portfolio”) for approximately $85 million, inclusive of transaction costs. The Portfolio is comprised of 14 operating retail assets, one residential building and two development and redevelopment sites on Henderson Avenue. The Portfolio is located in the heart of rapidly growing East Dallas, and in proximity to the city’s most affluent communities of Highland Park, University Park, Uptown and Lakewood.

The Portfolio includes a strong line up of digitally-native retailers such as Warby Parker, Tecovas and Bonobos, and a collection of some of the most popular restaurants in the city, as well as a high-performing supermarket, Sprouts Farmers Market.

Significant redevelopment and densification opportunities are expected to enable the Company to add retail and office space to this Portfolio and further connect and activate this already thriving district. The Company intends to partner with a local development team to oversee the execution of these projects.

In August 2022, Acadia refinanced and de-levered City Point, an approximately 550,000 square foot flagship retail property in Downtown Brooklyn, New York, held through Fund II. The approximately $295 million of aggregate debt on the property was refinanced with a single mortgage loan of approximately $200 million (with approximately $130 million of initial proceeds). The new loan has a three-year initial term, resulting in annual interest savings in excess of 150 basis points as compared to the prior blended interest rate. The Company provided a loan to its partners of approximately $65 million to fund their share of the refinancing and recapitalization of City Point.

The Company anticipates the refinancing and recapitalization to be slightly accretive in 2022 with further accretion in the next several years as City Point achieves stabilization.

City Point is located at the center of a densifying Downtown Brooklyn, which has seen approximately 18,000 new residential units since the area was rezoned. Several new and exciting tenants are anticipated to open at City Point over the next several months, most notably Sixpoint Brewery and Primark, who is replacing the former anchor, Century 21.

Lincoln Place (Fund IV). In May 2022, Fund IV completed the disposition of its property located in Illinois for approximately $41 million and repaid the mortgage of $22.7 million. This sale generated a 14% IRR and 1.8x multiple on the Fund’s equity investment.

During the second quarter, GAAP and cash leasing spreads were 15.4% and 4.3%, respectively, on 14 conforming new and renewal leases aggregating approximately 82,000 square feet.

During the second quarter and post-quarter to date, the Company continued to execute leases in its Core Portfolio, with Street leases signed on M Street in Washington D.C., Greenwich Avenue in Greenwich, CT and in Soho, NY.

As of June 30, 2022, approximately 90% of the Company’s Core debt is fixed, inclusive of interest rate swap contracts with a weighted average duration of approximately 6 years.

A complete reconciliation, in dollars and per share amounts, of (i) net loss or income attributable to Acadia to FFO (as defined by NAREIT and Before Special Items) attributable to common shareholders and common OP Unit holders and (ii) operating income to NOI is included in the financial tables of this release.

Amounts discussed below are net of noncontrolling interests.

Net loss attributable to Acadia for the quarter ended June 30, 2022, was $0.4 million, or $0.00 per share, which included a $8.9 million loss, or $0.09 per share, from the unrealized mark-to-market holding loss on its investment in Albertsons supermarkets (“Albertsons”), partially offset by a $3.0 million gain, or $0.03 per share, on a Fund disposition.

FFO as Defined by NAREIT

FFO Before Special Items for the quarter ended June 30, 2021 was $27.6 million, or $0.30 per share, which excluded $0.5 million, or $0.01 per share primarily from the unrealized mark-to-market holding gain on Albertsons.

The Company updated its annual 2022 guidance of earnings per share, NAREIT Funds from Operations and FFO Before Special Items attributable to Common Shareholders and Common OP Unit holders. Additionally, the Company updated its net income and FFO to reflect the unrealized holding (losses) gains recognized related to its investment in Albertsons through June 30, 2022. The Company has not reflected any forward-looking estimates involving future unrealized holding gains or losses (i.e. changes in share price) on Albertsons in its net income and NAREIT FFO guidance assumptions. Unrealized holding (losses) gains on Albertson’s shares are excluded from FFO Before Special Items. The revised guidance is based upon Acadia’s current view of existing market conditions and assumptions for the year ending December 31, 2022. Updated first quarter guidance was previously announced on May 2, 2022.

(a) The remaining Net Promote and other Core and Fund profits anticipated to be recognized in the second half of 2022 relate to the expected realization of gains from the sale of Albertson’s shares. The lock-up on the sale of the shares was extended through September 2022.

Management will conduct a conference call on Wednesday, August 3, 2022 at 12:00 PM ET to review the Company’s earnings and operating results. Participant registration and webcast information is listed below.

The Company uses, and intends to use, the Investors page of its website, which can be found at www.acadiarealty.com, as a means of disclosing material nonpublic information and of complying with its disclosure obligations under Regulation FD, including, without limitation, through the posting of investor presentations that may include material nonpublic information. Accordingly, investors should monitor the Investors page, in addition to following the Company’s press releases, SEC filings, public conference calls, presentations and webcasts. The information contained on, or that may be accessed through, the website is not incorporated by reference into, and is not a part of, this document.

Certain statements in this press release may contain forward-looking statements within the meaning of Section 27A of the Securities Act of 1933, as amended, and Section 21E of the Securities and Exchange Act of 1934, as amended. Forward-looking statements, which are based on certain assumptions and describe the Company’s future plans, strategies and expectations are generally identifiable by the use of words, such as “may,” “will,” “should,” “expect,” “anticipate,” “estimate,” “believe,” “intend” or “project,” or the negative thereof, or other variations thereon or comparable terminology. Forward-looking statements involve known and unknown risks, uncertainties and other factors that could cause the Company’s actual results and financial performance to be materially different from future results and financial performance expressed or implied by such forward-looking statements, including, but not limited to: (i) the economic, political and social impact of, and uncertainty surrounding the COVID-19 Pandemic, including its impact on the Company’s tenants and their ability to make rent and other payments or honor their commitments under existing leases; (ii) macroeconomic conditions, such as a disruption of or lack of access to the capital markets; (iii) the Company’s success in implementing its business strategy and its ability to identify, underwrite, finance, consummate and integrate diversifying acquisitions and investments; (iv) changes in general economic conditions or economic conditions in the markets in which the Company may, from time to time, compete, and their effect on the Company’s revenues, earnings and funding sources; (v) increases in the Company’s borrowing costs as a result of rising inflation, changes in interest rates and other factors, including the discontinuation of the USD London Interbank Offered Rate, which is currently anticipated to occur in 2023; (vi) the Company’s ability to pay down, refinance, restructure or extend its indebtedness as it becomes due; (vii) the Company’s investments in joint ventures and unconsolidated entities, including its lack of sole decision-making authority and its reliance on its joint venture partners’ financial condition; (viii) the Company’s ability to obtain the financial results expected from its development and redevelopment projects; (ix) the tenants’ ability and willingness to renew their leases with the Company upon expiration, the Company’s ability to re-lease its properties on the same or better terms in the event of nonrenewal or in the event the Company exercises its right to replace an existing tenant, and obligations the Company may incur in connection with the replacement of an existing tenant; (x) the Company’s potential liability for environmental matters; (xi) damage to the Company’s properties from catastrophic weather and other natural events, and the physical effects of climate change; (xii) uninsured losses; (xiii) the Company’s ability and willingness to maintain its qualification as a REIT in light of economic, market, legal, tax and other considerations; (xiv) information technology security breaches, including increased cybersecurity risks relating to the use of remote technology during the COVID-19 Pandemic; (xv) the loss of key executives; and (xvi) the accuracy of the Company’s methodologies and estimates regarding environmental, social and governance (“ESG”) metrics, goals and targets, tenant willingness and ability to collaborate towards reporting ESG metrics and meeting ESG goals and targets, and the impact of governmental regulation on its ESG efforts.