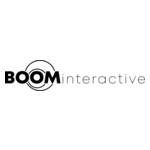 After selling Bashas’ to Raley’s in 2021, brothers Preston, Dalton and Brandon Basha created a family office along with their other two siblings, Tortuga Trading Co., to invest in companies like Boom Interactive, to breathe new life into the grocery industry. Tortuga has committed to building out the retail version of Boom Interactive’s flagship product, BubblesTM, called R3D™, and will be offering the software to their portfolio of retail partners.

“Boom Interactive’s technology is changing the way commercial developers construct and design their spaces and how brands display their goods,” said Brandon Basha. “We are honored to get our hands dirty to help this revolutionary platform blossom.”

The Basha brothers, whose family immigrated from Lebanon, founded Bashas’ Supermarkets, one of the most popular grocery chains in Arizona and New Mexico. “As an immigrant, our family was able to live the American dream over 90 years ago through the support of people who believed in them,” said Preston Basha. “Today, we want to give back in the same way to others who are paving their way in uncharted territory,”

Boom Interactive Inc. is based out of Salt Lake City and recently announced a $5.5M SAFE Note investment as a precursor to a Series A round, to aid The Company in building sales and marketing teams and launching additional products that showcase the same technology as Bubbles™, like R3D™.

”It wouldn’t have been possible to develop R3D so quickly if it wasn’t for the Bashas’ commitment and dedication to the technology and to the potential the software has in so many verticals, even beyond grocery and retail,” said CEO and Founder of Boom Interactive, Timber Barker. “When I met the Basha family, they made me feel like the fifth brother, and it was then I knew that this partnership was going to be paramount to the success of our collective vision for Boom.”

Looking towards the future, Dalton Basha added, “Eventually, Boom’s technology will be able to create AI experiences for shoppers, where they can shop from anywhere in the world through the metaverse.”

Boom Interactive Inc. is a software company based out of Salt Lake City Utah that specializes in advanced machine learning AI with a specific focus on image recognition for rapid 3D visualizations. They are a metaverse enablement company.

A second focus is on secure multi-platform based communication and collaboration tools, such as real-time networking in complex 3D environments. Think Figma, but in 3D!

In its arsenal, Boom has a proprietary technology that reads, recognizes and learns from complex line drawings, floor plans and sketches. This data is used to generate real time 3D environments which can have multiple applications in various markets.