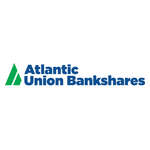 “We are excited to join the NYSE alongside many of the world’s most prestigious and well-regarded companies,” said John Asbury, President and CEO of Atlantic Union. “We believe that the NYSE is the right partner for Atlantic Union as we continue to build long-term value for our customers and shareholders.”

“We’re excited to welcome Atlantic Union to our NYSE community of icons and disruptors,” said John Tuttle, Vice Chairman, NYSE Group. “We look forward to working with the Virginia-based company for years to come.”