LSIGraph, the leading keyword research tool, announces that the app will rebrand as SurgeGraph with a revamped logo and mission. The team also lays out their future plans for bringing SurgeGraph to the forefront of SEO tools.

Federal Territory of Kuala Lumpur, Malaysia–(Newsfile Corp. – January 10, 2023) – Rising SEO tool LSIGraph has announced through an open letter on their website today that the app will rebrand with a new name – SurgeGraph. While also revealing a brand new logo that reflects this change, SurgeGraph declares that their new mission is to help businesses of all sizes grow their organic traffic by helping them achieve the “Surge Effect”. 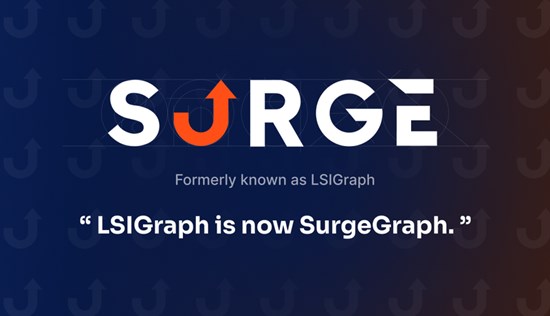 On the newly launched website, SurgeGraph reveals their new tagline: Grow Your Organic Traffic. FAST. The tool aims to help users grow their organic traffic faster by focusing on three cornerstones of SEO success – choosing the best keywords, writing long-form content that is the best among the top 10 on the SERP, and accelerating content velocity.

“We are thrilled to introduce SurgeGraph to the world,” said a spokesperson of SurgeGraph. “This rebranding is just the beginning of what we have planned ahead. We’re looking to roll out even more updates and features for the best version of SurgeGraph there is.”

In its open letter, SurgeGraph explains the reasons for the change, most notably that LSI, a highly-debated topic in the SEO community, is no longer relevant to their identity. SurgeGraph explains how they have evolved beyond LSI keywords and have grown to be more than just a keyword research tool.

The team also addresses why they chose the word “Surge” and how the new identity aligns with their new mission to help their users grow their organic traffic fast. Dubbing it the “Surge Effect”, SurgeGraph aims to help its users climb the rankings and witness a surge in their traffic graph.

SurgeGraph also announces their future plans for the app’s development, including new features like the AI Writing Assistant, Outline Builder, and Automated Topic Clustering. Perhaps the most anticipated feature, the AI Writing Assistant, which launches in the first quarter of the year, generates long-form content for users from scratch, enabling them to produce more content in a shorter time.

While it’s still in the works, SurgeGraph is said to go completely live by the end of January 2023. Readers interested in learning more about the rebranding effort can read SurgeGraph’s open letter on their website here.

To view the source version of this press release, please visit https://www.newsfilecorp.com/release/150820